Understanding the manifestation of make-believe companions. 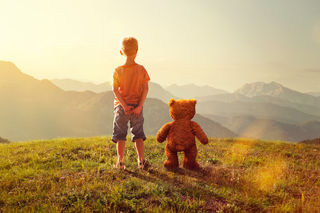 “Abraham Lincoln is my grandfather,” said our 5-year-old matter-of-factly.

“What?” I contemplated, standing in stunned silence.

“Yes,” he continued almost moved to tears. “I was very sad when John Wilkes Booth shot him in the theater.”

This example of our son’s imaginary relationships with historical figures is one of many. Beyond famous people from history, his preferred categories—book characters, movie actors, or wholly fictitious playmates—are frequently part of his complex daily play. The stories encompassing the imagined relationships are multifaceted and the emotional connections are strong. Should we be concerned?

The Psychology of Imaginary Companions

Imaginary companions are a common occurrence in childhood. Estimatessuggest as many as two-thirds of children have an imaginary companion at some point in their youth, with the occurrence usually falling between the ages of three and eight years of age—but sometimes moving into adolescence and beyond.

It appears that girls are more likely than boys to develop imaginary companions, and their expressions of the playmates differ. Girls are frequently teacher-like in their imaginary relationship, treating a baby animal or baby human in a nurturing manner. Boys, on the other hand, create acquaintances that are strong and competent, more powerful than themselves.

The vast majority of children recognize the imaginary friends are not real, even pointing it out to adults who happily go along with the ruse. Beyond the individual fictitious companion, some kids develop a paracosm, a highly detailed imaginary world.

Why Do Imaginary Companions Develop?

In general, kids who develop imaginary friends create them because it is enjoyable. Oftentimes, these imaginative kids are highly social and have a strong fondness for fantasy-play. These individual characteristics coalesce and trigger the development of imaginary companions.

Stephanie Carlson’s research suggests that children develop fictional companions to satisfy three psychological needs that are based on self-determination theory.

In his 1945 book, Common Sense Book of Baby and Childcare, Dr. Benjamin Spock suggested that parents should be troubled about a child over the age of four having an imaginary friend. According to Dr. Spock, these fictitious playmates were a sign of maladjustment or a lack of something in real life.

Jean Piaget, perhaps the most renowned developmental psychologist of the 20th century, also indicated, in 1962, that imaginary playmates were problematic and indicative of lack of coherence—a sign of a failing child.

Scientific evidence from the past three decades does not support the claims made by Dr. Spock or Dr. Piaget. In fact, the most current research suggests having imaginary companions in childhood is related to positive psychological variables in childhood and adulthood.

Relationship to Other Psychological Variables

While the research is correlational in nature due to the topic of study, there is evidence that children with imaginary playmates show advanced vocabulary and perspective-taking skills. In addition, they tend to be less shy, more socially-oriented children with higher levels of creativity in general.

Research also suggests a relationship between higher fantasy-orientation and higher scores on creative problems solving tests. Studies have uncovered that children with imaginary companions are better at finding alternative uses for things. They are less likely to succumb to functional fixedness.

Based on retrospective studies of childhood, it appears that these imaginative children tend to become more creative adults and score higher on “absorption” tests that indicate they have a more imaginative overall existence (e.g., losing themselves in novels).

While some researchers doubt the existence of a connection between imaginary friends and advanced intellectual abilities, there is a theoretical model that suggests heightened levels of imaginational capabilities are a characteristic of some children with superior cognitive abilities.

Kazimierz Dabrowski’s Theory of Positive Disintegration goes into great detail about the concept of Overexcitabilities (OEs), or super-stimulations, in gifted children. This article, by Michael Piechowski, describes this theory in detail. Dr. Piechowski provides a helpful description of the Imaginational OE, which has considerable overlap with the description of children with imaginary companions.

Here is a list of characteristics of Imaginational Overexcitabilities in children as described by Piechowski:

This is an intriguing area of study that will hopefully be more rigorously examined to improve the measurement of OEs and the study designs used to determine possible connections between Imaginational OE and imaginary companions.

Another fascinating area of psychological study that may be connected to imaginary companions comes from the highly validated and reliable Big 5Personality Theory. Research suggests there may be a relationship between childhood imaginary companions and an individual’s Openness to Experience (Openness). The Openness factor of the Big 5 has been correlated to higher levels of intelligence, which relates back to the concept of OEs and giftedness.

Dr. Taylor suggests thinking about imaginary friends as a “magical bubble.” I think this is a perfect analogy. The kids recognize the bubble but do not want to pop their enchanted world. Instead, they often encircle their parents within the bubble.

As a parent, if you find yourself navigating inside the bubble, embrace the experience. Use it as an opportunity to connect with your child. Probe and ask questions to gain insight into your child’s thoughts, feelings, and understanding of the world. Be careful not to take over the imaginary friend—the kids want control. If you play along, you may be surprised at the fun you will have and what awaits your creative children in the future. They may even become the next Agatha Christie!

For more information about imaginary companions, check out this wonderful series at Science Friday on National Public Radio.