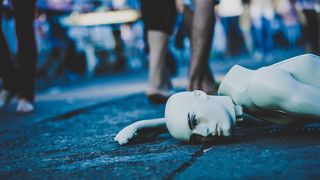 We all know that abhorrent behavior happens behind closed doors. But as soon as it’s brought out in front of us through film footage or photos we feel culpable, responsible, involved.

We don’t like being forced to ask ourselves difficult questions about suffering that most of us do little to stop. But why do we mindlessly click through and watch atrocities, and do nothing? Why does our outrage so rarely turn to action?

Much of what we witness both in real life and on screen we respond to with silence, disengagement, and tolerance. This is particularly the case when others also fail to take action or intervene.

Psychological scientist Andrew Monroe and his colleagues [1] have studied this in a number of social experiments. Their conclusion:

In other words, we largely decide on how we should behave based on how the people around us behave, not just our own moral compass. But what about when we witness suffering in films or in news segments online? Work by media studies researcher Johnathon Ong [2] shows that:

“Media witnessing has provided a guidepost in thinking about the ethical consequences of showing and seeing suffering in the media.”

This research posits that new films and news sources that readily capture and show real-world suffering come with new ethical concerns. Within this line of research there are questions about how we psychologically respond to distant suffering. One of the few studies done on this issue was published by Martin Scott [3]. He found that watching or hearing about the suffering of others in the media—people suffering who are distant in time or space from us—was “generally characterized by indifference” and that people readily dehumanized those who were represented.

When we watch films with others, we also inevitably slip into our own performance. We adopt the role of the watcher. A watcher who is conscious of being watched. Our expression of ethics and condemnation become a form of social theater. Before we laugh or groan, nod or yelp, we check in with the panopticon of our own social ethics. It’s constantly watching everything we do, controlling and modifying our behavior. The key purpose is to appear to others that we are good people, who act appropriately in light of ethically challenging material.

We don’t necessarily want to be good, ethically consistent people. We just want to be perceived as such. That’s likely why we share, like, or comment on depictions of suffering online. We showcase our outrage to the world, demonstrating that we are conscientious and ethically sound humans. But that’s often where it stops. Beyond our “clicktivism,” we rarely take action to prevent the suffering from continuing.

As I discuss in my book, Evil: The Science Behind Humanity’s Dark Side, we must all engage with our inner darkness, engage with taboo topics, and tackle our hypocrisies.

Watching “evil” on screen can force us to confront our inconsistent beliefs. It leads us to tear open our cognitive weak spots, exposing the hypocrisy that lies within. And when this happens, we can fight our inner apathy and our tendency to dehumanize. This is the best time to harness our sadness or outrage, to donate to charities that fight injustice in the world, or to get involved in more ethically consistent behavior ourselves.

Only when we alleviate our hypocrisies can we stop the vicious cycle of our own ethical destruction.